When Big Ben Joined the Skyline

When the design for A Name Unknown, book 1 in the Shadows Over England Series, was shown to me and I saw the spine for the first time, I was so excited to see the series logo they’d come up with. Big Ben’s clock tower.

Big Ben says London. Which is what the designers were no doubt trying to invoke, as my family of thieves are firmly Londoners. But for me, it was more than that. Because in the third book of the series, An Hour Unspent, that iconic clock actually plays a role in the story.

For starters, a bit of naming. Most of us think of “Big Ben” as the clock, but it’s technically not. Big Ben is actually the bell. The clock is the Great Westminster Clock, though over the years the name Big Ben has come to be associated with the entire structure. So now that we’ve got that straight… 😉

The clock tower was designed by Augustus Pugin and completed in 1859. Pugin was an architect, one who is most remembered for redesigning the interior of Westminster Palace and the tower in question, which has become one of the most iconic symbols of England. Though he also designed the face of the clock, the mechanics of the thing he wisely handed over to someone else.

But interestingly, the movement–the gears and weights that make a clock work, and in this case, work with amazing reliability–was actually designed by two amateurs to the field. Edmund Denison, a lawyer, and mathematician George Airy. The construction was the only part undertaken by an actual clockmaker, Edward Dent.

The Great Clock’s inner workings are so precise that a penny sitting on the pendulum is all it takes to make slight alterations to the time. That one little coin will make an adjustment of nearly half a second a day. That doesn’t sound like much, but it allows for small incremental adjustments to keep the clock accurate year after year. The pendulum still has a stack of old coins on it, and the clock is still hand-wound three times a week.

In my story, I gave the job of upkeep of the Great Clock to my heroine’s father, a clock maker. This part is purely fictional, of course, but it would have been considered a great honor to be tasked with such a responsibility, and in my story that’s the proof of Cecil Manning’s proficiency in his trade, even though he’s by no means made himself rich.

That honor goes to another historical figure that my fictional Manning claims as a friend, who revolutionized the timekeeping world. But you’ll have to check out An Hour Unspent: Companion Guide to learn more about that…

With Danger Creeping Ever Closer,
Do Their Dreams Still Matter?

Roseanna M. White is a bestselling, Christy Award nominated author who has long claimed that words are the air she breathes. When not writing fiction, she’s homeschooling her two kids, editing, designing book covers, and pretending her house will clean itself. Roseanna is the author of a slew of historical novels that span several continents and thousands of years. Spies and war and mayhem always seem to find their way into her books…to offset her real life, which is blessedly ordinary. You can learn more about her and her stories at www.RoseannaMWhite.com.

Roseanna has several giveaways and a special CONTEST for her readers! Click on the images below to learn more about each Giveaway. Or visit Roseanna’s blog. 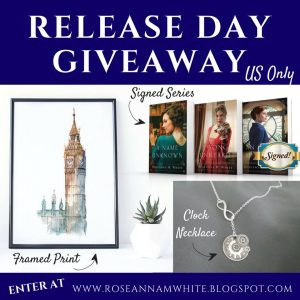 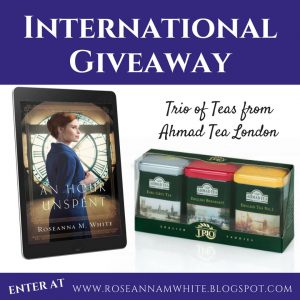 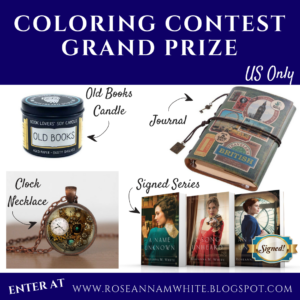