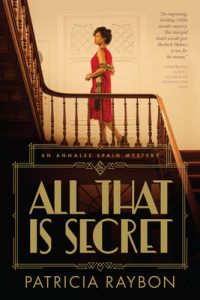 From award-winning author Patricia Raybon comes a compelling new historical mystery series, a riveting puzzle about a young Black theologian–and Sherlock fan–trying to solve her father’s cold-case murder in a city ruled by the KKK.
It’s the winter of 1923 and Professor Annalee Spain―a clever but overworked theologian at a small Chicago Bible college–receives a cryptic telegram calling her home to Denver to solve the murder of her beloved but estranged father.
For a young Black woman, searching for answers in a city ruled by the KKK could mean real danger. Still, with her literary hero Sherlock Holmes as inspiration, Annalee launches her hunt for clues, attracting two surprising allies: Eddie, a relentless young orphan boy searching for his missing father, and Jack, a handsome young pastor who loves nightclub dancing and fast cars–awakening Annalee’s heart to the surprising highs and lows of romance and love.
With their help, Annalee follows clues that land her among Denver’s powerful elite. But when her sleuthing unravels sinister motives and long-buried lies, will clever Annalee become a victim, too?

From the first pages of All That Is Secret, I was rooting for Annalee Spain. Patricia. She’s strong, independent, and caring while also vulnerable, uncertain, (and sometimes not so street smart).

Patricia Raybon takes readers along on Annalee’s mystery-solving ride with plenty of crooked goings-on and the many people involved in 1920’s Denver. But she also meets some good people along the way.

There are some hard-hitting issues in this book, which are true to the time period. Raybon handles them well and you’ll learn even more of the history in the author’s note at the end.

If you’re looking for a good murder mystery with a bit of romance and a heroine you won’t soon forget (good thing this isn’t the last we’ll see of Annalee), this is a book for you.