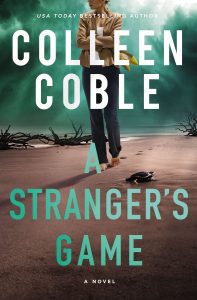 Even though Torie Bergstrom hasn’t been back to Georgia since she was ten, she’s happy to arrange a job for her best friend at one of the family properties on Jekyll Island.

But when Torie learns that her best friend has drowned, she knows it is more than a tragic accident: Lisbeth was terrified of water and wouldn’t have gone swimming by choice.

A fight for the truth.

Torie goes to the hotel under an alias, desperate to find answers. When she meets Joe Abbott and his daughter rescuing baby turtles, she finds a tentative ally.

The more Torie and Joe dig, the more elusive the truth seems. One thing is clear: someone will risk anything—even more murder—to keep their secrets buried.

A Stranger’s Game by Colleen Coble invites readers to Jekyll Island and a maze of suspense, mystery, and action.

Even though Coble managed to keep my attention throughout the entire book because I had to know if my guess of who was behind everything was right (it was), I didn’t connect with either of the main characters. Joe was an okay guy and a good dad, but that was it. Torie was all over the place for me. She would say one thing and then immediately act or say something that completely contradicted what she’d just said.

Overall, this book was an average read for me, but I’ll chalk it up to being the stand alone slump between Coble’s last series and the one she’s got coming soon.