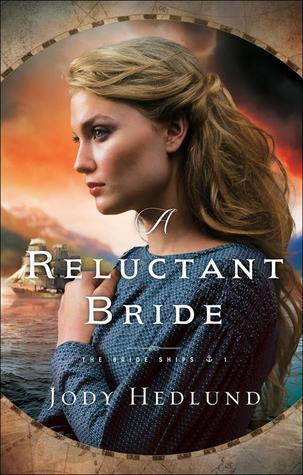 Living in London’s poorest slum, Mercy Wilkins has little hope of a better life. When she’s offered an opportunity to join a bride ship sailing to British Columbia, she agrees. After witnessing so much painful heartache and loss in the slums, the bride ship is her only prospect to escape a bleak future, not only for herself but, she hopes, someday for her sister.

Wealthy and titled Joseph Colville leaves home and takes to the sea in order to escape the pain of losing his family. As ship’s surgeon, he’s in charge of the passengers’ welfare aboard the Tynemouth, including sixty brides-to-be. He has no immediate intention of settling down, but when Mercy becomes his assistant, the two must fight against a forbidden love.

With hundreds of single men congregating on the shore eager to claim a bride from the Tynemouth, will Mercy and Joseph lose their chance at true love, or will they be able to overcome the obstacles that threaten to keep them apart?

The first book in Jody Hedlund’s new Bride Ships series gives readers an excellent introduction to the journey of women traveling from England to British Columbia to become brides for the men there. The majority of A Reluctant Bride takes place during the sea voyage.

Mercy Wilkins joins the bride ship in hopes of a better life—for her and maybe for her sister next. This young woman is kind and compassionate with a true servant’s heart despite her difficult circumstances in the slums of London. Joseph Colville is a titled man searching for a life outside of the social status. Only on a ship across oceans would these two characters interact.

Hedlund sets the time and place for this series well in this book, giving readers an education in the bride ships, juxtaposing the two extremes of London society, life on the ship, and the untamed British Columbia. And while I didn’t completely connect with either Joseph or Mercy, sometimes I just wanted to shake my head at them and say, “Open your eyes,” I wanted them to find happiness with each other in the end. Mercy’s insistence that she didn’t want to marry started to annoy me near the end, maybe because she’d said it so many times or maybe because it was so obvious she had fallen in love.

And while the story was fairly predictable, we were introduced to some other characters I hope will get their own spotlight in future books in the series.