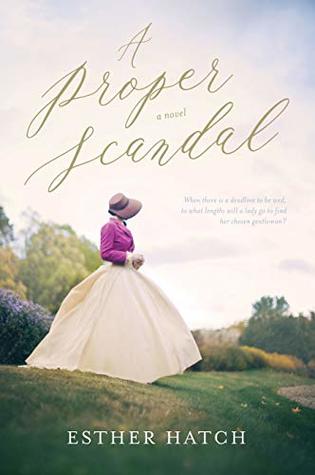 Grace Sinclair has been callously cast out of her home. And though taken in as an orphaned child by the vicar and his wife, her unsurpassed beauty makes it impossible for her to remain in the vicar’s household—with two daughters of their own about to enter Society, the vicar and his wife see Grace as nothing but competition. Thankfully, Grace’s estranged Aunt Bell has agreed to take her in to her home in London. But Grace soon learns her situation has just gotten much worse.

It takes only a moment’s acquaintance for Grace to ascertain that her aunt has married a detestable rake. And Aunt Bell, recognizing the danger of having her lovely niece too near her husband, gives Grace an ultimatum: the young woman has two weeks to find a man to marry, after which she will be turned out. With no experience in the art of attracting a husband, Grace quickly realizes that a worthy suitor might not be so easy to ensnare.

This book wasn’t quite what I expected—in the best kind of way. I love it when authors take me by surprise, and Esther Hatch does exactly that.

Grace is somewhat awkward in her goal, which makes for some fun scenes (almost everyone involving Nate for a while into the book) that made me laugh. Yet she’s also tenacious and sweet and you can’t help but root for her.

Nate is drawn to Grace from the moment he meets her yet repelled by her obvious schemes. He’s made his wealth by industry and not aristocracy which makes him that much more admirable throughout the story.

A Proper Scandal takes the usual Victorian-era story and gives it some twists and turns that make it a delight to read.