Y’all know me. I love Regency. Even though I’m pretty sure I would have been one of the servants and  working at the balls rather than attending them, I enjoy living vicariously through the characters who do meet their prince (or duke or viscount) in the social setting of the ton. So, of course, when an opportunity to review A Pirate at Pembroke by Danielle Thorne came along, I was on it. 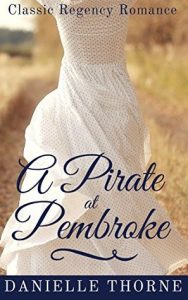 It took me a little while to figure out why I was struggling with this story at first and then it hit me. It never felt like we got into Sophie’s deep point of view. Instead, this story often read like a narrative. Which is fine when the story is conducive to it.

That said, I did get used to it after about halfway through the book, but I never felt like I really got to Sophie’s heart. Maybe that was purposeful since Sophie didn’t seem to know her heart at all. She is kind of naïve when it comes to the men vying for her attention.

Danielle Thorne does manage to keep readers guessing as to the Captain’s thoughts. There are hints, but Sophie doesn’t see them (or understand them). The fact that Sophie and Captain Murdock are able to speak honestly with each other is a pretty big hint. And Sophie’s relationship with her brother is sweet with moments of sour (which is how most sibling relationships I know of tend to go).

All in all, a lengthy average read too hurriedly wrapped up in the last chapter. While the concept of the book sounded interesting, this one just didn’t quite deliver. 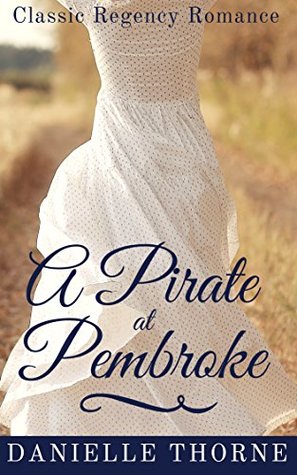 Keeping company with a reputed pirate is one thing, but falling in love with him could ruin the eccentric Crestwood family for good…

Sophie Crestwood is never going to catch a husband. Her father is a gossip, her mother has her nose in a book, and little Jack has shamefully been dismissed from boarding school. Worst of all, a pirate moves next door into Pembroke Hall.

When Sophie’s sent to a matchmaking party at a neighboring estate, the pirate from Pembroke arrives and distracts everyone from the summer festivities. Unguarded, her feelings about the mysterious Captain Murdock bloom into a trusted friendship that Sophie fears may come to mean more than anyone would ever suspect.