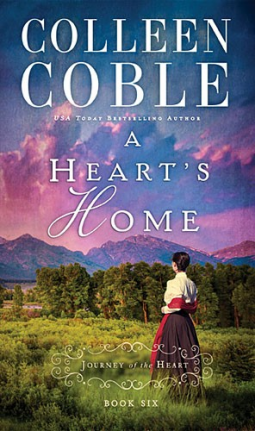 The final installment in the Journey of the Heart serials, A Heart’s Home finds Emmie Croftner with a difficult decision: Marry the man she loves or keep the promise she made to Amelia Campbell. The promise that if anything happened to her, Emmie would marry Jacob and care for him and Amelia’s daughter. With the Sioux attacks becoming more prominent and the death toll of men in Fort Phil Kearney increasing, Isaac Liddle volunteers to go to Fort Laramie for reinforcements in the middle of a blizzard. With weather and Indian attacks a threat, Emmie worries for the man she loves, refusing to give up hope he’ll come home to her.

A lot of emotion in this final book. Joy is followed quickly by heartbreaking sorrow. As someone who once lived in Wyoming, Coble’s description of the weather and wind is dead on. Most of the characters from the first five books at least make an appearance and the story is wrapped up nicely, including an epilogue to let readers know how the future turned out for Emmie. Another quick read because of the short installment length, but if you want all of them at once, the entire series will be available in September.

***Thomas Nelson provided me with a complimentary copy of this book via BookLook Bloggers. All opinions expressed are my own.