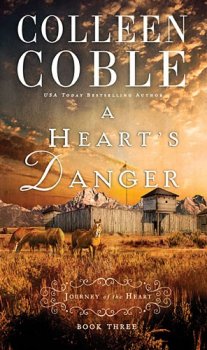 The third installment of the Journey of the Heart series picks up a few months after the second book. Sarah Montgomery struggles to accept that the love of her life, Rand Campbell will soon be married to another woman. Her days are spent caring for her younger brother and teaching the Sioux children the English language. Rand’s fiancée just wants Sarah Montgomery out of the picture. Tired of competing for his affections, she hatches a scheme with Ben Croftner, Sarah’s ex-fiancée, putting both Sarah and Rand in danger. Will their love survive mounting tensions with the Sioux, the elements of winter in Wyoming, and the evil plot against them?

It drives me crazy when the description on the back of the book doesn’t jive with the story. The very first sentence on the back of this cover states “Christmas is coming…” Well, Christmas doesn’t come. In fact, the story picks up in March (long past Christmas) and runs into the spring. And I don’t recall him making any promises about her moving to the territory in either of the previous books. Sarah made the decision to follow him all on her own. Ok, now that I’ve gotten that off my chest, let’s move on to the actual story.

As I’ve mentioned before, I’m enjoying this book in installments. It’s easy to pick up and spend and hour or so to get to the end. While I enjoy reading, sometimes I feel committed to finishing whatever I’m reading. In fact, I can think of only one book I’ve ever not finished. So, the installments to the Journey of the Heart series are perfect for a quick read before bed or in between chores. Coble’s letter to readers at the beginning of these books states these works have been out of print for ten years and there was some major changes made to the original. The story moves along with a lot of action, always something happening. While that makes for an engaging story, it doesn’t offer as indepth character development. Still, I read, hoping Rand and Sarah will find their way back to each other.

I believe the next three installments focus on different characters, but Rand and Sarah still make an appearance (well, that’s what the back of the next book says anyway, but who can believe those?).

***Booklook Bloggers and Thomas Nelson provided me with a free copy of this book in exchange for an honest and fair review. All opinions expressed are my own.