When it comes to historical fiction, Elizabeth Camden always shines brightly. A Daring Venture (new this month) is no exception. With characters who are memorable and a storyline that keeps you interested and invested, Camden delivers another must-read. 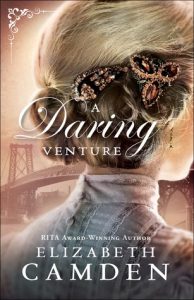 The thing I love about Elizabeth Camden is how she can take a piece of history that we take for granted today and bring it to life. In A Daring Venture, it’s plumbing and water purification. Who knew those two things could make such an engaging and enjoyable read!

Nick Drake was introduced in A Dangerous Legacy as he secretly installed plumbing in buildings. Now, his time spent helping others is something reporters clamor to capture.

When Nick meets Rosalind Werner, the attraction is immediate, and he’s not shy about voicing his interest. Rosalind is a scientist, on the opposite side of a court case as Nick, yet neither of them can deny the attraction.

I love and hate Nick’s straightforward nature. This is a man who tells it like it is. He loves his daughter and his sister, tells Rosalind exactly how he feels (one word: spectacles), and his desire to bridge the gap between his family and his aunt. But he’s also opinionated and unbending to the point of rigidity when anyone breaks his trust (and he’s not always the best judge of who to place his trust in). The combination makes him a flawed hero, which I find refreshing.

The story takes some unexpected twists and turns which makes it that much more enjoyable! This is why Camden is at the top of my must-read-authors list. 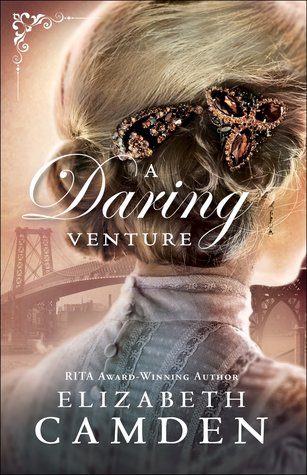 As a biochemist in early 1900s New York, Doctor Rosalind Werner has dedicated her life to the crusade against water-borne diseases. She is at the forefront of a groundbreaking technology that will change the way water is delivered to every household in the city–but only if she can get people to believe in her work.

Newly appointed Commissioner of Water for New York Nickolas Drake is highly skeptical of Rosalind and her team’s techniques. When a brewing court case throws him into direct confrontation with her, he is surprised by his reaction to the lovely scientist.

While Rosalind and Nick wage a private war against their own attraction, they stand firmly on opposite sides of a battle that will impact far more than just their own lives. As the controversy grows more public and inflammatory and Rosalind becomes the target of an unknown enemy, these two rivals will face higher stakes than they ever could have known.