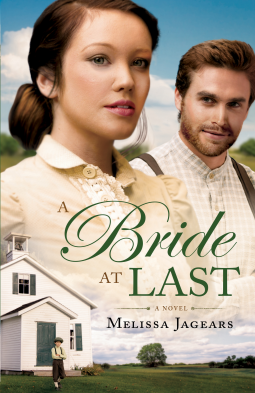 Silas Jonesey arrives too late to reconcile with the mail-order bride who’d abandoned him a decade ago. While Lucinda wasn’t the easiest woman to deal with, Silas knows he made mistakes too. Mistakes he still struggles with at times. He does learn that he might have a son, nine year old Anthony. Longing for the family he never had, Silas puts all of his effort into proving his paternity. The problem? Kate Dawson. The teacher loves the boy and believed she’d be taking over his care. Not to mention the other man claiming to be the boy’s father. As Silas and Kate spend time together, they become friends with the possibility of more. But can past hurts and mistakes ruin their chance to create the family Silas dreams of?

A Bride at Last had me on a rollercoaster ride with this couple. Kate doesn’t trust Silas at first, but he is determined to prove himself. Both her and Anthony. Right when you think there will be a decision made of who Anthony’s father is, they’re thrown together even more when Anthony disappears. A few times throughout the story, it looks like this couple is giving up before they even begin. But God’s forgiveness and grace are greater than fear of the past. The journey to the final page is an enjoyable one.

****Bethany House Publishers provided me with a complimentary copy of this book via NetGalley in exchange for an honest and fair review. All opinions expressed are my own.