Welcome to the Blog + Review Tour & Giveaway for Wyatt, the fourth book of The Montana Marshalls series by Susan May Warren, hosted by JustRead Publicity Tours! 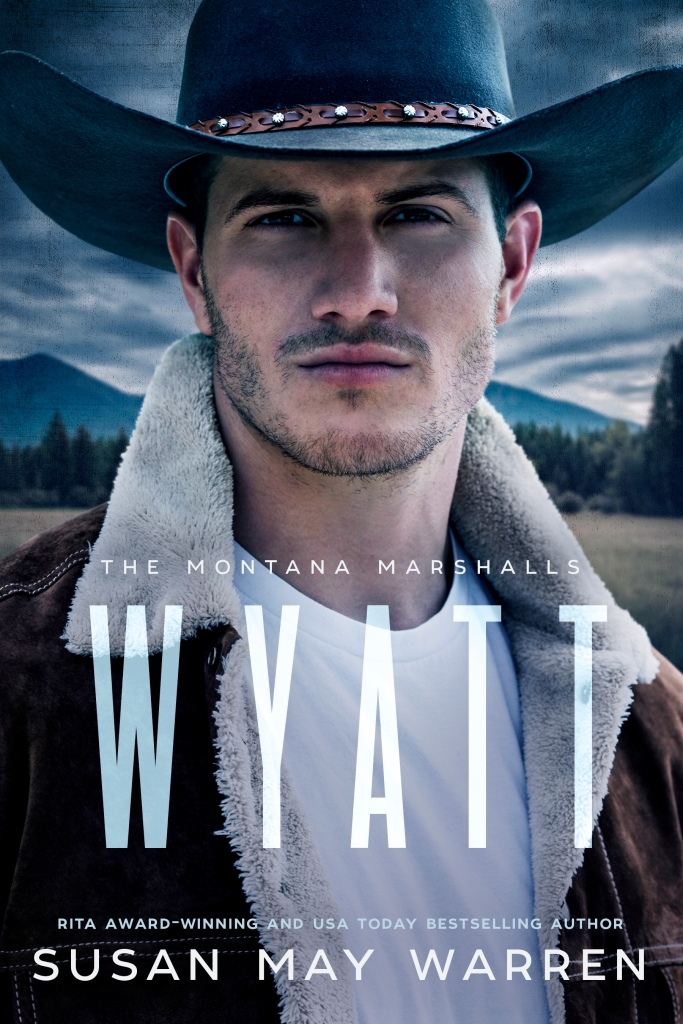 NHL Hockey Goalie Wyatt Marshall has everything–fame, money and a thriving career. But he’s hiding the two things that matter most…a career-ending injury, and his broken heart. He’s been in love with Coco Stanley since she walked into his life at age fourteen, a foster child for the Marshall family. She stole his heart years later, when, after a secret tryst, she returned to her home country of Russia. But she won’t let him back into her life—and he can’t figure out why.

She’s harboring a secret that could cost lives…

Coco Stanley is tired of living her life undercover. Or at least, with an assumed name, always pretending to be someone she’s not. And that’s not the only secret she’s harboring. If Wyatt discovers the real reason she left him, it might just destroy him. She’s resigned herself to loving him from afar…

But when he discovers she’s in danger…

Wyatt is horrified when he learns Coco has been shot and left in Russia, her fate unknown. There is nothing—nothing—that will stop him from finding her. So what if he’s not one of his super-heroic brothers, not a Ranger, not a SEAL…Wyatt is a hockey goalie, a special kind of crazy brave. Except, is he brave enough to face the secret Coco is keeping, or will it destroy everything he’s hoped for?

What will it cost them to save her?

What Wyatt and Coco don’t know is that revenge is stalking her and bringing her home just might cost them their long-awaited happy ending.

Susan May Warren once again delivers an epic romantic adventure that pulls you in and leaves you white-knuckled throughout. But really, it’s Susan May Warren, did you have any doubt?

One character hits the nail on the head when he says, “This family should come with a warning label.” If these Marshall siblings can rescue others from the most challenging of circumstances with only one or two involved, imagine the force the entire family would have!

Wyatt doesn’t even consider himself a hero like his brothers, but for the woman he loves, he steps up to the plate (or into the goal for a shutout since he is an NHL goalie. Be still my hockey-loving heart).

I adored Wyatt. His sometimes rambling monologues are hilarious but when push comes to shove, he is, indeed, a hero. Both on and off the ice.

And what an ending Warren leaves us with. It will have you clamoring for the next (and final) book in the series. Is it any wonder Warren is a reader favorite?

Susan May Warren is the USA Today bestselling, Christy and RITA award-winning novelist of over sixty-five novels. An eight-time Christy award finalist, a three-time RITA Finalist, she’s also a multi-winner of the Inspirational Readers Choice award, and the ACFW Carol Award.

A seasoned women’s events speaker, she’s a popular writing teacher at conferences around the nation and the author of the beginning writer’s workbook: The Story Equation.

She is also the founder of MyBookTherapy.com, and Novel.Academy, a school for aspiring novelists.

(1) winner will receive a signed copy of Wyatt and a Montana Marshalls Magic Mug!

Be sure to check out each stop on the tour for more chances to win. Full tour schedule shown below. Giveaway will begin at midnight October 2, 2019 and last through 11:59 PM EST on October 9, 2019. US only. Winner will be notified within 2 weeks of close of the giveaway and given 48 hours to respond or risk forfeiture of prize.