From Sellout to hero, by way of the den. Braxton Luther finds himself in the crossfire of a new order, and discovers apathy is a dangerous option.

J. Rodes takes readers to a way of life that I can easily see happening in our future. A world where changing one word in the constitution changes the landscape of a country and persecutes Christians. Not freedom of religion, but freedom from religion.

The youth are most susceptible (and easiest to sway) for to these changes, and through this trilogy, readers get a glimpse of the different responses.

Braxton begins his journey in complacency. Nothing’s going to change with the new president, so why is everyone getting all worked up over it? His best friend Eliza is against the new president and “the party.” Their other classmates are riding the party wave and harassing those who do not comply. 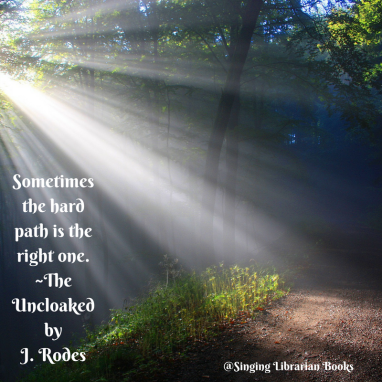 I loved watching Braxton’s growth through this series. He realizes the mistakes he’s made, loses what he treasures most, and fights to defend those who are persecuted.

As each book adds another POV from the first (Braxton in The Uncloaked; Braxton and Eliza’s sister in Tearing the Veil; and Braxton, Eliza, and the president’s nephew in Charging the Darkness), readers get a well-rounded and well-developed series.

While a clean read, there are some difficult scenes that include violence and death, they leave plenty to the imagination. If you like YA dystopian reads or are looking for a good, clean read with a message for teenagers in your life, don’t overlook this series! 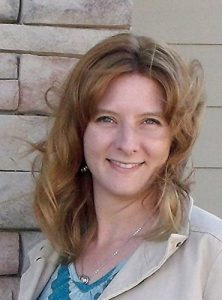 J. Rodes lives on the wide plains somewhere near the middle of Nowhere. A coffee addict, pickleball enthusiast, and storyteller, she also wears the hats of mom, teacher, and friend. Mostly, she loves Jesus and wants to see the kids she’s honored to teach fall in love with Him too. 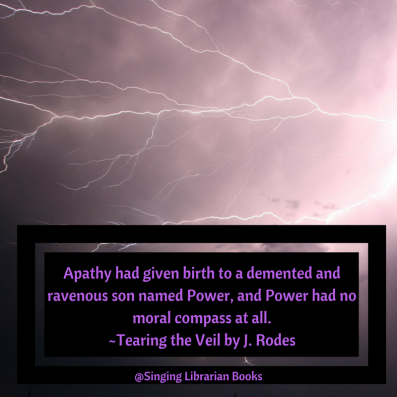 Music for The Uncloaked Trilogy

Writers, like many other artists, are often fed by music. When I first started writing with a more serious intent, I was still running 5Ks with my husband. I have vivid memories of pounding out a few miles, earbuds tucked in, music moving through my spirit, and scenes of my then-current work-in-progress scrolling through my mind.

I’ve since quit running—back problems and foot issues. But I still listen to music, drawing inspiration from the rhythm, emotion, and lyrics (almost every writer I know does this at least every now and then). The mood of the music will often paint itself on the page, and I thought it’d be fun to share with you some of the songs that carried me through as I was writing The Uncloaked Trilogy.

Braxton: He’s stubborn. A bit of a punk, but his heart aches from some things that are beyond his control. In the end… well, you’ll have to read. But I love the quote from the lyrics written below. This is Braxton Luther.

Eliza: A tender reed—except, not. This young woman… she is fierce, in her own quiet, resolute way. Honestly, she is who I want to be someday, and I love that she made her way into my heart through this story. This is Eliza’s life.

And now, the books themselves…

Man, I love this song. Also, though The Uncloaked can be dark, and the end feels… well, we need to keep going, the thread underneath is this song.

“If you could only let your guard down, You could learn to trust me somehow

Tearing the Veil: This lyric from Not Gonna Die pretty much says it all.

“When everything you love is leaving, you hold onto what you believe in!”

“No one ever wins when the goal is to settle the score.”

This song… it is the ungirding of all three books. The anthem that encases them all. I’ve listened to it dozens and dozens of times, over and over again. It doesn’t get old, and it still flows like fuel through my veins. 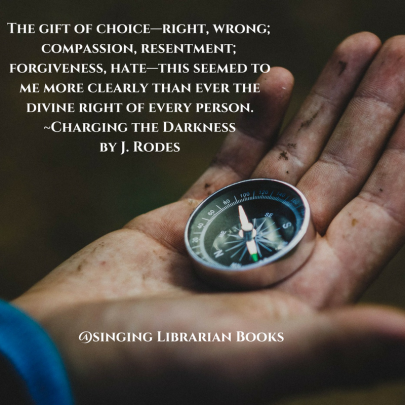 1. Print copies of the books (US only)

2. E-copies of the books (International)

3. Audio copies of the books (International)