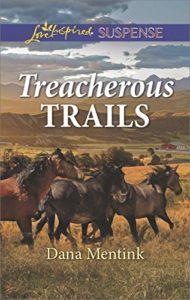 Can she escape the real killer?

In this second installment in the Gold Country Cowboys series, farrier Ella Cahill is accused of murder—and only former marine Owen Thorn, her brother’s best friend, can help clear her name. Now with someone trying to kill Ella, Owen must protect her…despite his promise to her brother to stay away from her. But can they work together to find the true killer before she becomes the next to die?

Clear your schedule, take a deep breath, and hold onto your saddles before you return to Dana Mentink’s Gold Country. Just like a wild mustang, Treacherous Trails is one wild ride.

From the first page Mentink yanks readers into Ella and Owen’s story and doesn’t let go. With plenty of close calls and questions to be answered, this story goes by faster than a thoroughbred racehorse.

Oh, and let’s not forget about the unicorn shirt. This little reprieve had me laughing out loud.

With lots of combined memories, the history between Owen and Ella give this story depth and substance. Ella’s been hurt by Owen before (even though it takes him a while to catch on). As both of these characters fight to uncover the truth and save Ella from a murder conviction, they grow close once again.

But Owen knows what he wants, what he is made for, and Ella is not in that picture. Can he give up one dream to discover an even better one? 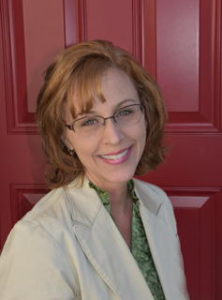 Dana Mentink is a two time American Christian Fiction Writers Carol Award winner, a Romantic Times Reviewer’s Choice Award and a Holt Medallion winner. She is a national bestselling author of over thirty five titles in the suspense and lighthearted romance genres. She is pleased to write for Harlequin’s Love Inspired Suspense, Harlequin Heartwarming and Harvest House. Dana was thrilled to be a semi-finalist in the Jeanne Robertson Comedy With Class Competition. Besides writing, she busies herself teaching third grade. Mostly, she loves to be home with Papa Bear, teen bear cubs affectionately nicknamed Yogi and Boo Boo, Junie, the nutty terrier, a chubby box turtle and a feisty parakeet. You can connect with Dana via her website at danamentink.com, on Facebook, YouTube (Author Dana Mentink) and Instagram (dana_mentink.)

Howdy, friends! I am so thrilled to be galloping into the second book in the Gold Country Cowboy series with you. This book was a hoot to write. It’s got a nice twisty mystery and plenty of danger! Our hero, twin Owen Thorn, is a Marine doing his darnedest not to fall in love with his brother’s little sister, but you know how these things go, don’t you, partners? There’s trouble ahead in cowboy country and this story will take you on a wild gallop to the happy ending! God bless and thanks for coming along! 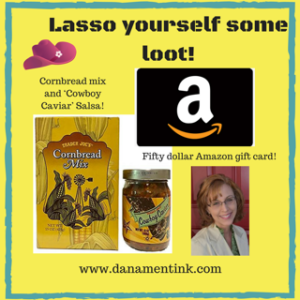 To celebrate her tour, Dana is giving away a grand prize package of a $50 Amazon gift card, Cornbread Mix, and Cowboy Caviar Salsa!!

Reading Is My SuperPower, April 12

The Power of Words, April 15

To Everything a Season, April 16

Among the Reads, April 16

Have A Wonderful Day, April 20

Because I said so – and other adventures in parenting, April 21

proud to be an autism mom, April 21