Welcome to the Blog Tour & Giveaway for The Scroll by Miriam Feinberg Vamosh, hosted by JustRead Publicity Tours! 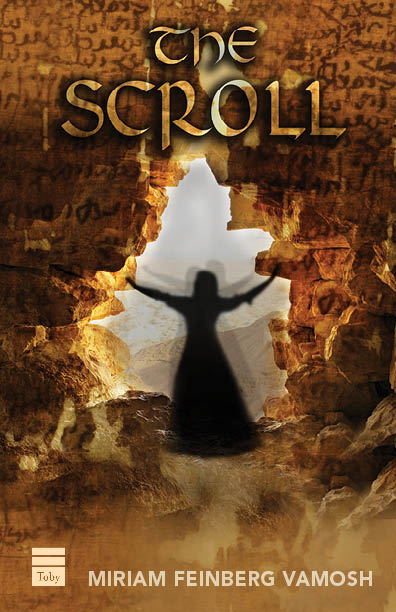 The Scroll is a multi-generational historical novel about the survivors of Masada. It draws from an authentic archaeological find: the divorce document of a woman named Miriam.

This fictionalized version of Miriam’s story begins in the year 73 CE on Masada’s final horrific day, where enemies within and without bring about the downfall of the last Jewish fortress. Its survivors are forced to choose between nation and family, and finally, between life and death. Will they learn the lessons of Masada’s downfall?

Although it tells of events that took place two millennia ago, The Scroll sheds extraordinary light on the complexities of modern Israeli society and the dilemmas faced by Israel and its leaders today.

Miriam Feinberg Vamosh was born in Trenton, New Jersey and has lived in Israel for over four decades. She is the author of the best-selling Daily Life at the Time of Jesus, which has been translated into 32 languages. She is also the author of Women at the Time of the Bible, Food at the Time of the Bible, Teach it to Your Children, How Kids Lived in Bible Days, and with Eva Marie Everson, she wrote the award-winning Reflections of God’s Holy Land, a Personal Journey Through Israel. Her historical novel, The Scroll, is a moving saga about the survivors of Masada and their descendants over three generations, and is based on a real archaeological find.

The Best-Known Ancient Document You Never Heard Of: Five Facts about the Scroll that Inspired The Scroll

An astonishing number and variety of papyri and parchment documents have emerged from excavations in the Judean Desert. Undoubtedly the best known of these are the Dead Sea Scrolls, the oldest copies to date of God’s contract with humanity – the Bible. As precious as these scrolls are, another Judean Desert document, discovered in the 1950s, speaks to my heart in a special way. It’s also a contract, but another kind, to be sure – between a man and a woman – a Jewish divorce document. The place and time that it was issued gave me the unique foundation for the story I tell in The Scroll.

Here are five facts (in some you get two facts for the price of one, but I couldn’t resist) about this ancient document.

1. First, the basics: The divorce document (called a get in Hebrew) was written in ink on papyrus, the paper of the ancient world made from a plant by the same name, in the Aramaic language, which is also the language that Jesus spoke.

2. The document states the year and place it was issued: the place: Masada, the date:  “Year Six.” That refers to the sixth year of the revolt of the Jews against the Romans, corresponding to 71 AD. This was about one year after the Temple and Jerusalem were destroyed. But the rebels at Masada, apparently including the couple named in this document, held out for about another two years after that.

3. Speaking of names, the document also reveals the name of the couple – Joseph and Mary; I wrote it that way for familiarity’s sake, but it’s actually Joseph and Miriam. These two names, the experts tell us, were the most common ones they’ve found, for example inscribed on coffins or in ancient texts. When I knew that I wanted to write a story about this document, I initially felt a bit awkward that the ancient lady in question had the same name I do. But then I decided we were both named after a great biblical heroine, and that I would make the best of it and not change her name (too late to change mine…). That’s because I thought I use this to explore how a modern-day Miriam might respond to the challenges I believed an ancient Miriam faced.

4.  Dissolution of a marriage is taken very seriously in Judaism, and there are all kinds of rules to make sure it is not taken lightly. One of the fascinating aspects of the divorce document date-lined Masada is that not only is it similar in many ways to the rules set out in the ancient Jewish commentary the Mishnah, but also similar to those still issued in the present day.

5. Why in the world would such a couple, committed so fiercely to their community, their people and to God, get a divorce at that particular juncture? It was another ancient source that gave me my idea for the answer to that question: In parsing the story of David and Goliath, the ancient sages concluded that the men of Judah, before they went off to war with David, gave their wives a “conditional divorce,” so in the awful case that they did not return for a prolonged period but their death be proven, their wives would be free to make a life for themselves. This is what I imagine Joseph gave Miriam – I call it a “loving divorce.” Over the centuries, by the way, Jewish sages wrestled with the idea of whether this was legitimate or not; the Israeli army chaplaincy corps even made an attempt to compose such a document, but the attempt was quashed when it was decided it would adversely affect morale.

Enter via the Rafflecopter giveaway below. Giveaway will begin at midnight January 21, 2019 and last through 11:59 pm January 28, 2019. Open internationally except where prohibited by law. Winners will be notified within 2 weeks of close of the giveaway and given 48 hours to respond or a new winner will be chosen.