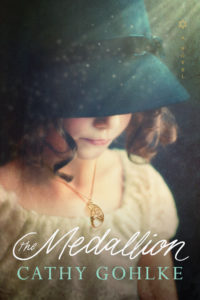 Book: The Medallion
Author: Cathy Gohlke
Genre: Historical Fiction (World War II)
Release date: June 4, 2019
For fans of bestselling World War II fiction like Sarah’s Key and The Nightingale comes an illuminating tale of courage, sacrifice, and survival, about two couples whose lives are ravaged by Hitler’s mad war yet eventually redeemed through the fate of one little girl.

Seemingly overnight, the German blitzkrieg of Warsaw in 1939 turns its streets to a war zone and shatters the life of each citizen—Polish, Jewish, or otherwise. Sophie Kumiega, a British bride working in the city’s library, awaits news of her husband, Janek, recently deployed with the Polish Air Force.

Though Sophie is determined that she and the baby in her womb will stay safe, the days ahead will draw her into the plight of those around her, compelling her to help, whatever the danger.

Rosa and Itzhak Dunovich never imagined they would welcome their longed-for first child in the Jewish ghetto, or that they would let anything tear their family apart. But as daily atrocities intensify, Rosa soon faces a terrifying reality: to save their daughter’s life, she must send her into hiding. Her only hope of finding her after the war—if any of them survive—is a medallion she cuts in half and places around her neck.

Inspired by true events of Poland’s darkest days and brightest heroes, The Medallion paints a stunning portrait of war and its aftermath, daring us to believe that when all seems lost, God can make a way forward.

Alright friends grab a box (or three) of tissues and settle in for an emotional journey with Cathy Gohlke’s newest World War II novel.

The Medallion is set in Poland, and Gohlke excels in giving readers different perspectives but ramping up the emotions with each character’s journey. There’s Sophia and Janek, a woman from England who married a Polish man who is now a pilot in the country’s air force. And Rosa and Itzhak, newlyweds who come to Poland to care for Rosa’s mother.

From the ghettos to work camps to the underground group working to save as many as they can, and a harrowing journey to England, Gohlke delves into the horrors, the heartbreak, the courage, and the kindness of those surrounded by the evil that was the German war machine.

Without giving anything away (because this book needs to be experienced), there are some extremely difficult moments in The Medallion, moments that, according to the author’s note, are at least steeped in truth. And others that made me consider what I might do in a similar situation. When you’ve lived through the horrors of war, would you be willing to let go of the one thing that gave you hope?

These are the questions that will linger after the final page is turned and the final word is read. 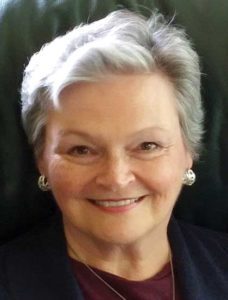 Three-time Christy and two-time Carol and INSPY Award–winning and bestselling author Cathy Gohlke writes novels steeped with inspirational lessons, speaking of world and life events through the lens of history. She champions the battle against oppression, celebrating the freedom found only in Christ. Cathy has worked as a school librarian, drama director, and director of children’s and education ministries. When not traveling to historic sites for research, she, her husband, and their dog, Reilly, divide their time between northern Virginia and the Jersey Shore, enjoying time with their grown children and grandchildren. Visit her website at www.cathygohlke.com and find her on Facebook at CathyGohlkeBooks.

Every story begins with a journey. Sharing that journey is twice the joy.

The Medallion was inspired by two true stories—the first was the WWII account of Itzhak Dugin and his Jewish family, persecuted in Lithuania. Their heart-wrenching story made world news when the tunnel from which Itzhak escaped the Nazis was discovered using modern technology.

The second was the story of Irena Sendler, a Polish Catholic social worker within Żegota (an underground Polish Council to Aid Jews), who developed a network to rescue children. Despite terrible risks, they smuggled 2500 Jewish children from the Warsaw Ghetto and certain death at the hands of the Nazis, then hid them in Polish homes, convents, churches and hospitals until the end of the war. Approximately 2,000 of those children were found after the war. Theories abound regarding the whereabouts of those missing. I couldn’t help but wonder, and imagine: What became of those 400 to 500 missing children? What became of one?

Set in WWII Poland and post-war England, The Medallion is a story of courage, sacrifice, love, forgiveness and redemption. 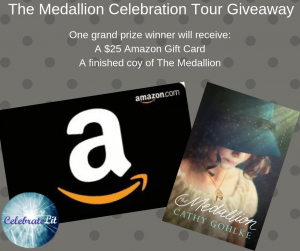 To celebrate her tour, Cathy is giving away a grand prize of a $25 Amazon gift card and a copy of the book!!

Be sure to comment on the blog stops for nine extra into the giveaway! Click the link below to enter. https://promosimple.com/ps/e50c/the-medallion-celebration-tour-giveaway

The Power of Words, June 23

Where Faith and Books Meet, June 24

For Him and My Family, June 24

Through the Fire Blogs, June 25

For the Love of Literature, June 29

Spoken from the Heart, June 29

Have A Wonderful Day, June 30

To Everything A Season, July 3

A Good Book and Cup of Tea, July 4

For The Love of Books, July 4