Louisa Coultrie Halloway has returned home as caretaker for the family home on Edisto Island, but years before she left this world behind. Now she flounders to find her place. When Liam Whiting, a local professor studying tidal creek preservation, invites Lou to join his research team, she welcomes the opportunity for purpose.

David, her ex-husband, has followed Lou and their children to Edisto. As he finds his footing in this new life, their once strained relationship eases into a familiar rhythm—and he hopes for more.

But the past still has a hold on them all, especially in the presence of Grace Watson, whose son intends to marry Lou and David’s daughter. Somehow, Grace and Lou must let the past of a shared love settle between them.

In this idyllic setting, relationships, like the creeks, deepen and shift. Once more, Lou finds herself caught between the life she’s chosen—and the love that might be meant to be.

Lindsey P. Brackett writes southern fiction and cooks big family meals, but she complains about the dishes. Her debut novel, Still Waters, released in 2017 and was named the 2018 Selah Book of the Year. Her latest novel, The Bridge Between, released in 2019. Someday she hopes to balance motherhood and writing full-time. Until then, she’s just very grateful for her public school system.

Connect with Lindsey and get her free novella, Magnolia Mistletoe with newsletter signup at lindseypbrackett.com.

“Sparkler time.” Cole grabbed the package and headed out the door, his brothers on his heels.

Outside was clear—a sailor’s dream sky. The boys set off the sparklers against the midnight black and whooped when someone a few streets over sent up a spray of light.

Lou stamped her feet and rubbed her arms. “I’m going to freeze to death.” She’d traded her earlier t-shirt for a sweater, and David could tell it was thin by the way the fabric skimmed her body.

“Here,” he slid his coat around her shoulders, pulling the collar close under her chin and brushing aside her chestnut hair. She’d let it grow beyond her jaw for the first time in at least a decade.

“Thank you.” They stood that way for only a moment—but in the freshness of the new year under skies beaded with light eternity could have come and he would’ve died a happy man. 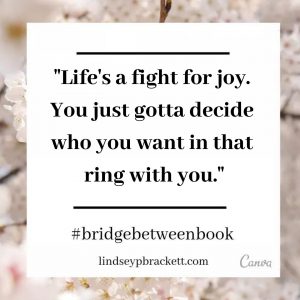 Lindsey P. Brackett brings readers back to Edisto, SC with a story built around broken relationships. While The Bridge Between can be read on its own, readers will get so much more out of this book if they’ve read Brackett’s debut novel, Still Waters, first.

Through the eyes of three characters and the here and now mixed with their earlier lives, Louisa, David, and Grace are granted second chances in friendships, families, and love. This story about people is beautifully set against the Edisto setting that gives readers an insider’s view of the town—both the positives and the negatives.

The triplets are a great addition to the book, and I loved catching up with Cora Ann and Tennessee. The three-generations of family represented give The Bridge Between wonderful depth as each of the characters determines what’s worth holding onto and fighting for in their lives.

(1) winner will receive a Bridge Between Prize Pack.

Giveaway is subject to policies HERE.

Check out the tour schedule HERE.