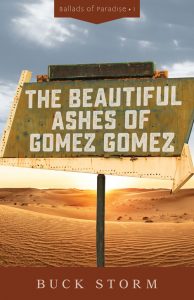 When his wife, Angel, is killed in a head-on collision, Gomez Gomez feels he can’t go on–so he doesn’t. He spends his days in the bushes next to the crash site drinking Thunderbird wine, and his nights cradling a coffee can full of Angel’s ashes. Slow, sure suicide, with no one for company but the snakes, Elvis’s ghost, and a strange kid named Bones.

Across town, Father Jake Morales plays it safe, haunted by memories of the woman he left behind, hiding his guilt, loss, and love behind a thick wall of cassock and ritual. Then a shady business deal threatens the town–and his good friend Gomez Gomez–and Father Jake can’t just stand by and watch. But what happens when the rescuer is the one in need of saving?

The Beautiful Ashes of Gomez Gomez is quirky, heartfelt, and deeply human. Lives and hopes collide in the town of Paradise, stretching across decades and continents in this epic story of forgiveness, redemption, and love.

I wasn’t sure what to expect from this book, and there were some high and low points for me.

It was hard to get into the story, there are so many character points of view, it was difficult to really connect with any single one of them. There was also a lot of repetition throughout the book (specifically in the dialogue but also in the whole plot development).

That said, the themes of this book—the impact someone has on the lives of many, forgiveness, and healing—are woven throughout. The friendship between Gomez Gomez, Early, and Jake is forged through years and life experiences and even when those ties are fragile, they remain.

And while a couple things took me by surprise in the book, I had most of them figured out long before their big reveal.

Literary fiction with pieces of magical realism, the story takes themes that are often found in Christian fiction and gives them an original spin.

Buck Storm is a critically acclaimed author and musician whose stories have found friends around the world. His nonfiction work 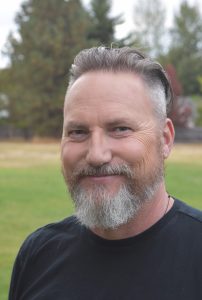 includes Finding Jesus in Israel and Through the Holy Land on the Road Less Traveled. Storm’s novels include The List, The Light, Truck Stop Jesus, and The Miracle Man. The latest, The Beautiful Ashes of Gomez Gomez, launches his new series, Ballads of Paradise.

Storm and his wife, Michelle, make their home in North Idaho and have two married children. 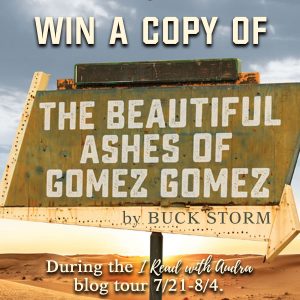