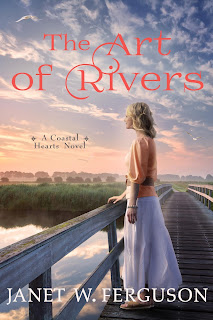 Rivers Sullivan bears both visible and invisible scars—those on her shoulder from a bullet wound and those on her heart from the loss of her fiancé during the same brutal attack. Not even her background as an art therapist can help her regain her faith in humanity. Still, she scrapes together the courage to travel to St. Simons Island to see the beach cottage and art gallery she’s inherited from her fiancé. When she stumbles upon recovering addicts running her gallery, she’s forced to reckon with her own healing.

After the tragic drowning of his cousin, James Cooper Knight spends his days trying to make up for his past mistakes. He not only dedicates his life to addiction counseling, but guilt drives him to the water, searching for others who’ve been caught unaware of the quickly rising tides of St. Simons. When he rescues a peculiar blond woman and her sketch pad from a sandbar, then delivers this same woman to his deceased grandmother’s properties, he knows things are about to get even more complicated.

Tragic circumstances draw Cooper and Rivers closer, but they fight their growing feelings. Though Cooper’s been sober for years, Rivers can’t imagine trusting her heart to someone in recovery, and he knows a relationship with her will only rip his family further apart. Distrust and guilt are only the first roadblocks they must overcome if they take a chance on love.

Step one. Admit he was powerless over his new addiction. God, help me.

Cooper pried his gaze from Rivers, stood, and forced his attention onto the picture she’d painted. The landscape in front of him did zilch to cure him of his Rivers fascination, which was quickly evolving into a reckless obsession. The work mesmerized him, swallowed him like the big fish that ate Jonah, but in such a way that he didn’t want to be spit out just yet. He knew full well the brain chemistry associated with viewing beauty on or off a canvas, how the dopamine released, triggering feelings of warmth and pleasure. And his dopamine was exploding like Mount Vesuvius over Pompeii.

The color, the shapes, the composition—the sheer power of the piece woke places deep inside him—barred off places that had been chained shut. Because he and the ocean had an immense love-hate relationship. The beach held sweet memories of his childhood, a place where he could escape the inevitable bullying he’d endured because of his speech impediment. But the Atlantic had stolen and buried Savannah and then shredded his family.

On this canvas, Rivers had taken in the beauty of the Atlantic, and her artistic and spiritual voice in the scene swept his breath away. As if a veil had torn away from a blind man’s eyes, he could see the ocean anew, Christ’s hand above all, his scars forgiving Cooper’s failure. There came an almost physical nudge in his soul that this particular message—this painting—was meant specifically for him, and it was not just a message from the earthly fingers that had held the brush.

Janet W. Ferguson grew up in Mississippi and received a degree in Banking and Finance from the University of Mississippi. She has served as a children’s minister and a church youth volunteer. An avid reader, she worked as a librarian at a large public high school. She writes humorous inspirational fiction for people with real lives and real problems. Janet and her husband have two grown children, one really smart dog, and a cat that allows them to share the space.

One winner will receive a $10 Chick-fil-A gift card and signed copies of the first two books in the series, Magnolia Storms and Falling for Grace
US only
Ends November 6, 2019