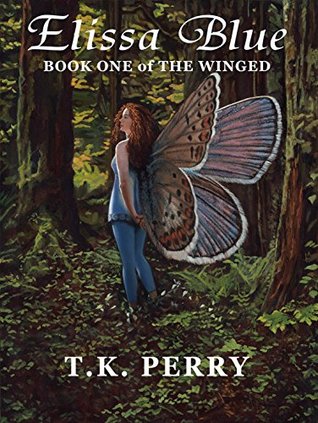 Though she worried it might never happen, Elissa Blue has finally gotten her wings. Now she has a short window of time to migrate to the Mating Mountain, find a husband, and get back down the impassable cliffs before she loses her ability to fly forever. If she doesn’t succeed, she’ll be stranded as a servant in the Old Castle for the rest of her life. And if she doesn’t choose her man wisely, she might be just as miserable.

T.K. Perry lives with her husband and daughter in a lovely Oregon forest filled with wildlife (there is probably a house, too, but that’s less picturesque). When she isn’t writing or watching said wildlife, she enjoys making jewelry, pretending to be a photographer, and trying to save the world (a frustrating task since she lacks both superpowers and a costume).

“What? Is there an angry bear behind me?” Elissa’s smirk faded as she shot a quick glance behind her, then whipped back to her twin. “Why are you making that face? Cari, you’re starting to scare me.”

Cari’s freckled skin was suddenly pasty, her pale blue eyes wide with alarm. “It’s…” her words ended in a stifled shriek, and she fell forward smashing a half-eaten sandwich. “My back!” Cari clutched at the well-worn wool of the picnic blanket, panting.

Elissa leapt over the empty basket and knelt behind her sister, flicking Cari’s long auburn braid out of the way as she yanked up the back of her sister’s shirt. The taut skin pulsed with a mottled, purple hue. As Elissa watched in fascination, the skin broke open in an eight-inch, vertical slit over Cari’s left shoulder blade, oozing a clear fluid as something dark burst from the opening.

“It’ll come…” Elissa assured her, impatiently tucking her wild copper curls behind her ears as she watched the wadded, dewy tissue continue to extend, slowly differentiating into an overlapping fore and hindwing.

“What color?” Cari called out between gasps and grunts. As she spoke, her right wing set burst through her skin. “Owww! Was that the other set?”
“You have two! Well, four wings, two wing sets,” she corrected giddily. “And they’re gray!”

Cari twisted her head around to peer at her newest anatomy. “They look so wrinkled and gross.” Breathing heavily, Cari slowly pulled up to her knees, craning to look first over one shoulder and then the other.

“Of course they do; they’ve just been born!” Elissa laughed at her sister’s uncharacteristic impatience.

“Wow, that hurt.” Gingerly, Cari touched the eighteen inches of wet, charcoal swaddling that was her left wing set. At her touch, it slowly stretched, dramatically increasing in length as the delicate panels separated and unfurled.

“Does it hurt now?” Elissa’s hesitant hand hung in the air just behind Cari’s right hindwing.

“Not really…kind of like cramped muscles…I need to stretch.” Cari dropped back to all fours, then clenched her jaw with effort as her second wing set extended out. Elissa shuffled back awkwardly on her knees, staining her pant legs the bright green of the spring grass.

“You moved it!” Elissa exclaimed with a startled grin.

“Of course I did.” Cari pressed her wings closed and then open several times, the gray panels becoming less wrinkled and wet by the moment. Only now did she look down and realize her shirt was bunched up on her chest, her navel bare. “Oh,” she said, blushing.

“Just help me tear some holes in this one.” Cari slipped her shirt off and stared at the soaked back. Only then did she become aware that the back of her pants were wet, too. “Uh…let’s keep to the trees on the way home.” Her blush deepened, her cheeks nearly matching the deep red of her hair.

“It’s no big deal; remember we saw Cisa leaving school after her wing birth. Everybody has seen it before,” Elissa soothed.

“And no one has stopped talking about it since!”

“True.” Elissa let her curls fall around her face to hide her smile, and quickly tossed the remaining food into the basket.

Frowning, Cari ripped out the back of her shirt, leaving only the collar intact, then slipped it back on. “A little chilly, but at least it’s dry.”

“And very revealing!” Elissa teased as she shook out their blanket and handed it to her sister.

“Hush!” Cari chided, carefully wrapping the blanket under her wings and around her waist. “Does it look weird?” Cari spun around to display her makeshift skirt, but lost her balance as her wings caught the air. She wobbled, dropped the blanket, and steadied herself with outstretched arms and twitching wings. “Let’s take the forest route home.”

Elissa hid her grin by stooping to retrieve the basket and discarded blanket. “Forest route it is.”

They started home, gingerly picking their way along the muddy path with tree roots that rippled the ground like bulging veins. Cari twitched her wings in an irregular pattern as they walked, her body tensed with the effort of moving them.

“They’re really quite pretty.” Elissa blurted into the silence. “The back sides are turning all vivid blue next to the dark gray. Did you see it?”

Cari nodded as she craned her neck to look again. “I need a mirror,” she mumbled.

The path was changing now as the forest thinned. Roots gave way to rocks on the steeper ground, and both girls had to watch their feet instead of the new wings. When the path leveled again, Cari resumed the slow opening and closing of her wings.

“How long do you think before you can fly?”

“I don’t know.” Cari stopped so abruptly that Elissa nearly smacked her wings with the swinging basket. Oblivious to the near miss, Cari yanked her braid out of the way and began to flutter her wings in earnest. After several minutes, her hiking boots were still firmly on the ground, and Cari’s forehead and upper lip were damp with perspiration. “Not yet,” she said, shrugging.

“Luckily, you still have legs,” Elissa teased, squinting into a patch of afternoon sunshine that beamed through the tall trees.

Cari tried to shoot her a glare over her shoulder, but her wings were in the way. Distracted into a smile, she resumed down the path.

The girls fell into a reflective silence, each caught up in her own thoughts as they worked their way through the edge of the forest. A tawny squirrel scolded their exit just as a chilly breeze bit through the remaining trees. Their path opened up into a flowering field, and Elissa walked alongside her sister now, allowing space for Cari’s constant fluttering.

“Everything will be different now,” Elissa complained, pulling absently at her bottom lip.

“You’ll get your wings soon.”

“When will you leave?” Elissa asked, kicking a rock out of their path.

“Well, I’ve got to get some winged clothes first, obviously,” Cari said, self-consciously touching her bare back. “But after that, as soon as I can fly, I’m off to the Old Castle.”

Elissa smirked. “Why not just call it the Mating Mountain? Everybody does.”

Cari shook her head, her wings drawing back as her shoulders tensed.

Elissa sighed, narrowly resisting an eye roll. “When are we shopping?” She pasted on a cheerful smile.

Cari took a deep breath, her wings flaring out as she relaxed. “Once we get home, I’ll need about ten minutes to get cleaned up and borrow one of Mom’s tops.”

Elissa let out a surprised laugh. “Since when are you eager to shop?”

A soft smile crept across Cari’s face as a splotchy blush lit her freckled cheeks.

“Ah, the hormones have got you now.”

“Hmm…violence instead of a denial; very hormonal,” Elissa noted, dancing out of her sister’s reach as she tried to shove her again.

This book was a bit of a departure for me in the YA I do read. It leans a little more toward fantasy than I normally like. Yet, following Elissa through her journey to womanhood and finding love was enjoyable, nonetheless.

Fair warning, there is a lot happening in this one, especially once Elissa makes it to what the kids have dubbed Mating Mountain. Once there, Elissa discovers family she didn’t know about previously and must sort through her hormones to discover her heart’s desire.

In truth, she seemed flighty (pun intended) to me when it came to guys—not able to settle on one person. Instead, she’s continually convinced the one she is with is her perfect mate.

That aspect of her personality is juxtaposed against her loyalty to the family and friends she meets and makes along the way. She visits them, encourages them, and sympathizes with them when they’re hurting.

I had a pretty good guess at who Elissa’s “one” is throughout, but Perry kept planting small seeds of doubt at points.
This story does deal with some more mature topics such as infidelity, mating, marriage, hormones and a vague allusion ot rape. Each of those is handled delicately in the fantasy setting which adds a layer of cushion when necessary.