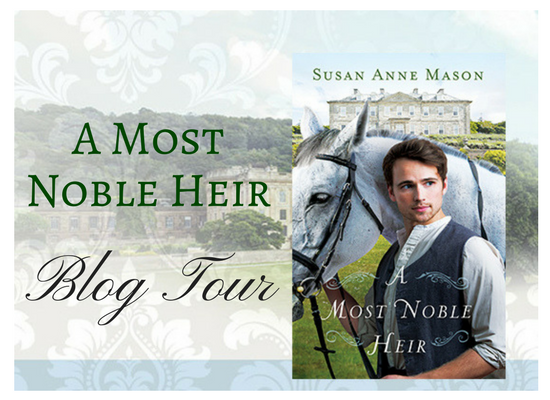 I found it interesting to read Susan Anne Mason didn’t plan on writing historical fiction. It’s a very good thing God had a different plan for her.

A Most Noble Heir is a story about family. There are all sorts in a family, aren’t there? The controlling figure, the meek and quiet member who doesn’t state their opinions, the nurturers, and the mediators. I realize there are more but since these four are represented in Mason’s newest read, we’ll stop there.

What makes a family work? Mutual respect, honesty, communication, caring, and love. But when those are replaced with undermining, secrets, hidden hurts, and high handedness, arguments arise, families fracture, and selfishness reigns. Again, all things in Mason’s book

As Nolan Price struggles to navigate the English aristocracy, a world he’s spent his years serving but never dreamed he’d become a part of, he refuses to give up the woman he loves. When burdens, tensions, and more arise, Nolan just might be forced to give up the hopes and dreams he’s always harbored for his future with Hannah.

A Most Noble Heir takes readers through the ringer with a bit of danger, a touch of romance, and plenty of conflict and dissension. 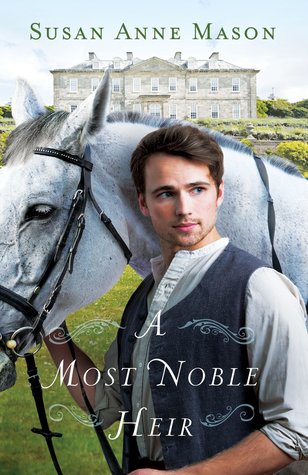 When stable hand Nolan Price learns from his dying mother that he is actually the son of the Earl of Stainsby, his plans for a future with kitchen maid Hannah Burnham are shattered. Once he is officially acknowledged as the earl’s heir, Nolan will be forbidden to marry beneath his station.

Unwilling to give up the girl he loves, he devises a plan to elope–believing that once their marriage is sanctioned by God, Lord Stainsby will be forced to accept their union. However, as Nolan struggles to learn the ways of the aristocracy, he finds himself caught between pleasing Hannah and living up to his father’s demanding expectations.

At every turn, forces work to keep the couple apart, and a solution to remain together seems further and further away. With Nolan’s new life pulling him irrevocably away from the woman he loves, it seems only a miracle will bring them back together.

What others are saying:

“Beautifully balancing sweet forbidden love with a father-son battle of wills, Mason proves to be a highest caliber author in historical inspirational romance. Set in England in 1884, this is a marvelously entertaining story of the search for identity and a struggle for acceptance for both Nolan and Hannah. The purity and tenacity of their love will leave readers tingling, and fans of Roseanne M. White will enjoy Mason’s web of nobility drama and breathlessly exciting conclusion.”—Booklist starred review

“This is a sweet story full of the historical details fans of Victorian fiction will appreciate. There is also plenty of faith and love leading this young couple to their happily ever after.”—RT Book Reviews

“An immersive narrative and sympathetic characters are highlights of this heartwarming novel from Mason about the importance of family, the power of love, and the faith to pursue your heart’s desire.”—Library Journal 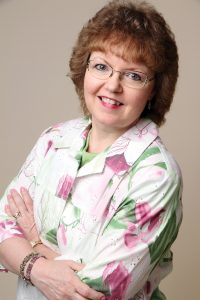 Susan Anne Mason’s debut historical novel, Irish Meadows, won the Fiction from the Heartland contest from the Mid-American Romance Authors Chapter of RWA. Also a member of ACFW, Susan lives outside of Toronto, Ontario, with her husband and two children. She can be found online at www.susanannemason.com. 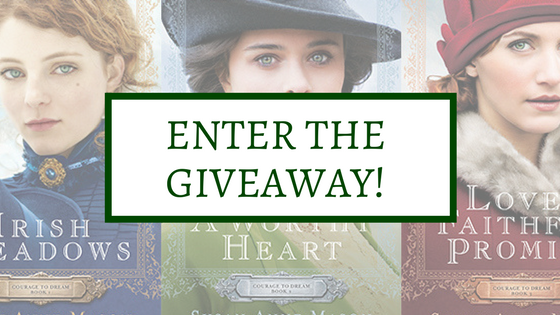